The Obama family (Michelle Obama and daughters Malia and Sasha) visited Glendalough in County Wicklow while her husband President Barack Obama was busy at the G8 summit in Fermanagh on 18th June. They were shown around this 6th century monastic site and apparently enjoyed the experience, although the children looked bored at times.

Local tour guide George McClafferty gave them a talk on the history of the site including some of the associated legends like the story of the wild doe appearing to St Kevin, founder of the monastery, who milked it and fed two orphan babies from the hollowed-out stone, now called the Deer Stone. Sasha (aged 13) was given the task of closing the door to the ruins of the 1500 year old St Kevin’s Church. She turned the key and locked the door, before giving her sister a ‘high five’. The Obamas were also given a private guided tour of the Wicklow Mountains National Park. 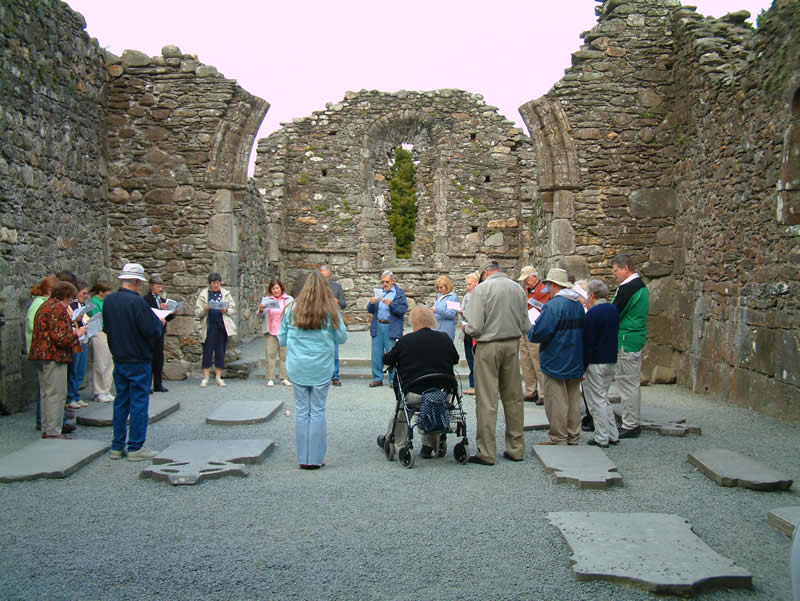 Glendalough and the surrounding hills and valley with Glendalough lakes, is one of the most popular rural landscapes in Ireland and one of the most visited areas of the country. The monastery was founded by Kevin, a descendant of one of the ruling families in Leinster, at the end of the 6th century together with a small group of monks. He died in about 618 but the monastery flourished for six centuries afterwards. The iconic round tower, built of mica-slate and granite is about 30 metres high, with an entrance 3.5 metres from the base. The tower originally had six floors, connected by ladders and was used for accommodation, storage and as a safe refuge during times of attack. The cathedral was reconstructed at various times over the centuries. The chancel and sacristy date from the late 12th and early 13th centuries.
St. Kevin’s Cell was built on a rocky area over the lake, and is said to have been the small stone dwelling where St. Kevin lived.

The area is well worth a visit and hopefully the publicity surrounding the Obama visit will encourage other to visit County Wicklow.

Good information about Glendalough can be found at http://www.glendalough.ie